I’ve wanted either than an Arduino Zero or M0 for a while then i saw this board as I was browsing an online store, coming in at under $14 it seemed reasonably priced for an arduino type board with an ARM Cortex M0 microcontroller. Since it can be used with the ARduino IDE and potentially can use shields as well this seems a good option for beginners and hobbyists

Lets look at a bit of the blurb on the board

The RobotDyn SAMD21 M0 represents a powerful, 32-bit extension of the Arduino UNO platform. The board is powered by Atmel’s SAMD21 MCU, featuring a 32-bit ARM Cortex® M0 core.
Compatible with Arduino Zero and Arduino M0.

The SAMD21 M0 board expands the family by providing increased performance, enabling a variety of project opportunities for devices, and acts as a great educational tool for learning about 32-bit application development.
The Zero applications span from smart IoT devices, wearable technology, high-tech automation, to crazy robotics. The board is powered by Atmel’s SAMD21 MCU, which features a 32-bit ARM Cortex® M0+ core. One of its most important features is Atmel’s Embedded Debugger (EDBG), which provides a full debug interface without the need for additional hardware, significantly increasing the ease-of-use for software debugging. EDBG also supports a virtual COM port that can be used for device and bootloader programming.

Key thing in the specs is that the board I/O pins are rated at 3.3v, so take that into consideration.

This core is available as a package in the Arduino IDE cores manager. Just open the “Boards Manager” and install the package called: 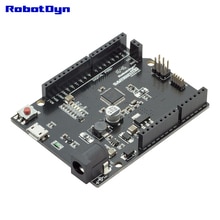 A look at the STM32F4DISCOVERY with an Arduino based example